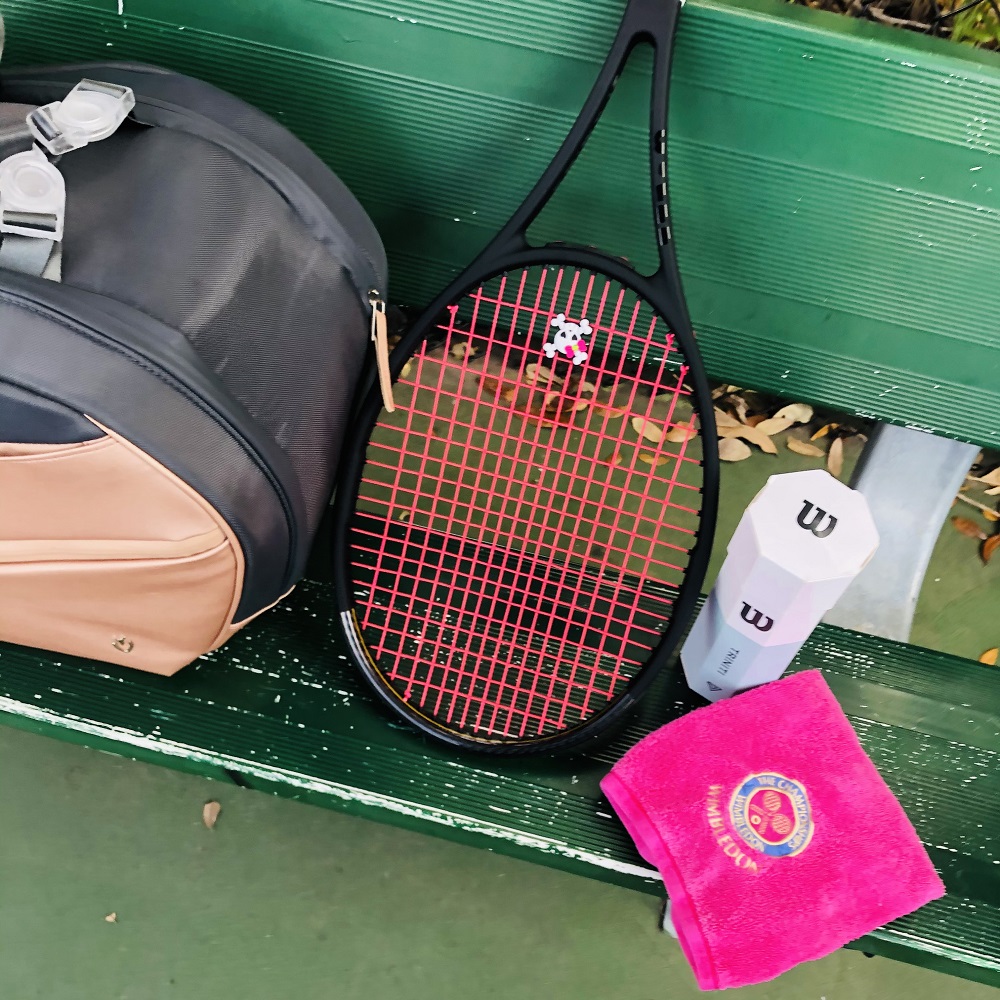 *Disclosure: I was provided with a Wilson Pro Staff 97 V13 tennis racquet to playtest and review, however, all opinions below are solely my own. This post also contains affiliate links. If you use these links to buy something we may earn a commission. There are no additional costs for you. The funds help us maintain this website, and we thank you for your support! You can read our full disclosure here.

Recently, I had the opportunity to playtest Wilson’s newest racquet, the Pro Staff 97 V13, and it was awesome!

With their latest addition to the Pro Staff collection, Wilson pays homage to its very first all-graphite racquet, the Pro Staff 85 that came out in 1983, and in my personal opinion, they truly did it justice!

Here are the two racquets, side by side:

Here are the two racquets sided by side – the first generation Pro Staff and the new Pro Staff 97 V13. Notice how the head is a little rounder and the handle is a little longer.

Visually, the original Pro Staff had a (matte..?) black frame with red and yellow pinstripes, a wide 16×18 string pattern. The modern version has a similar paint job with smaller pinstripes, but a slightly larger head with a denser 16 x 19 string bed, and an ergonomic butt cap.

As I wasn’t even born in 1983, I can’t attest for the original Pro Staff’s performance, however, based on this new version, I am confident in saying that it was far ahead its time. After all, it was the racquet of choice for some of the tennis legends: Pete Sampras, Steffi Graf, Stefan Edberg, Jim Courier, and Chris Evert, and our GOAT Roger Federer has used them his entire career, winning 20 Grand Slams, so I’m pretty sure I’m right! 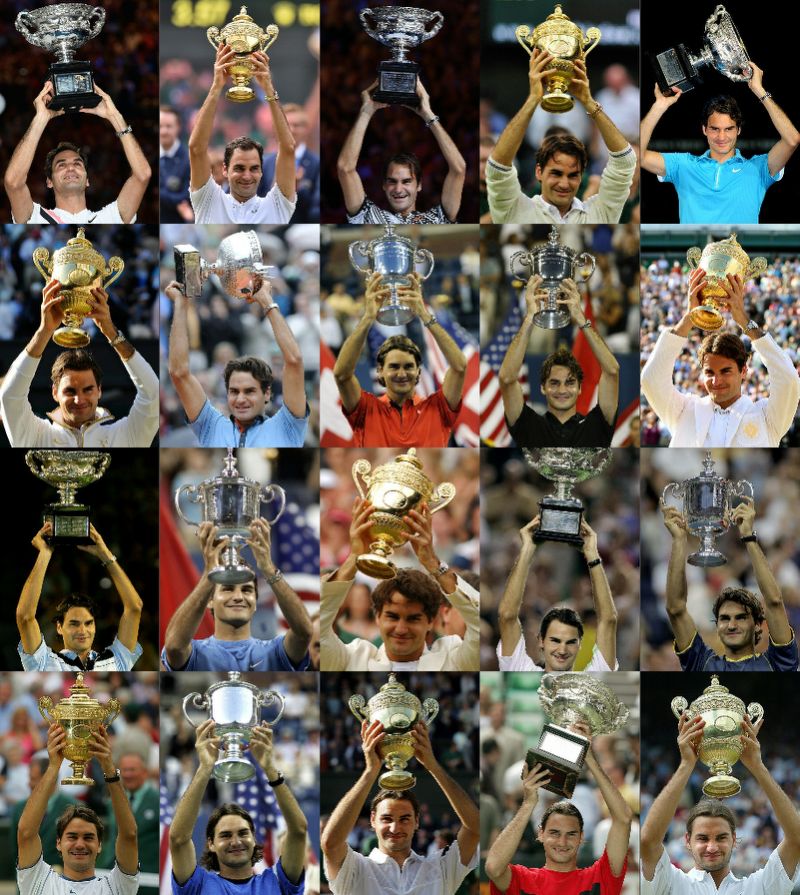 Roger Federer has used the Pro Staff racquets his entire career, including his 20 Grand Slam wins.

I guess I’ll get the boring stuff out of the way first, and by that, I mean the specs. Most rec players I know don’t even know what half of these numbers mean (lol!) but they’re still uber important when choosing a racquet. I’m a 4.5 league player, and I’m still learning :-)

When I unboxed the Wilson Pro Staff V13, the first thing I noticed was the weight. Even though it was unstrung, I could still “feel” the power.

And then, there is the color — matte black accented with small red and yellow pinstriped markings. It’s like the original Pro Staff 85 but with a more modern vibe. 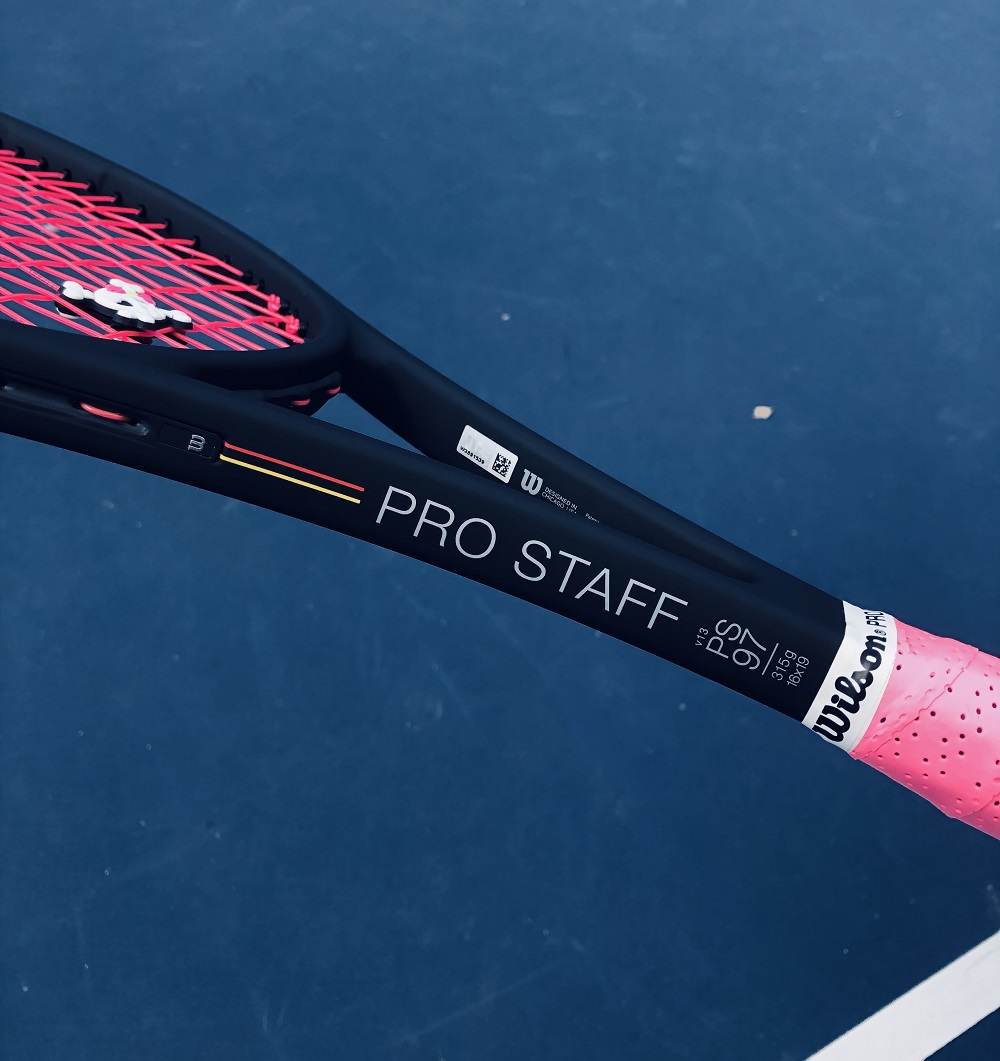 The red and yellow pinstripe details are more subdued on this 13th generation racquet (unlike my plethora of neon pink, lol!)

It came without strings, so I took it to Tennis Express and Johnathon hooked me up with some neon pink multifilament 16g string and overgrip. Hey… I’m a girl… and so is my racquet!

I couldn’t wrangle up a hitting partner my first time with this racquet, so I spent a couple of hours hitting with a ball machine. 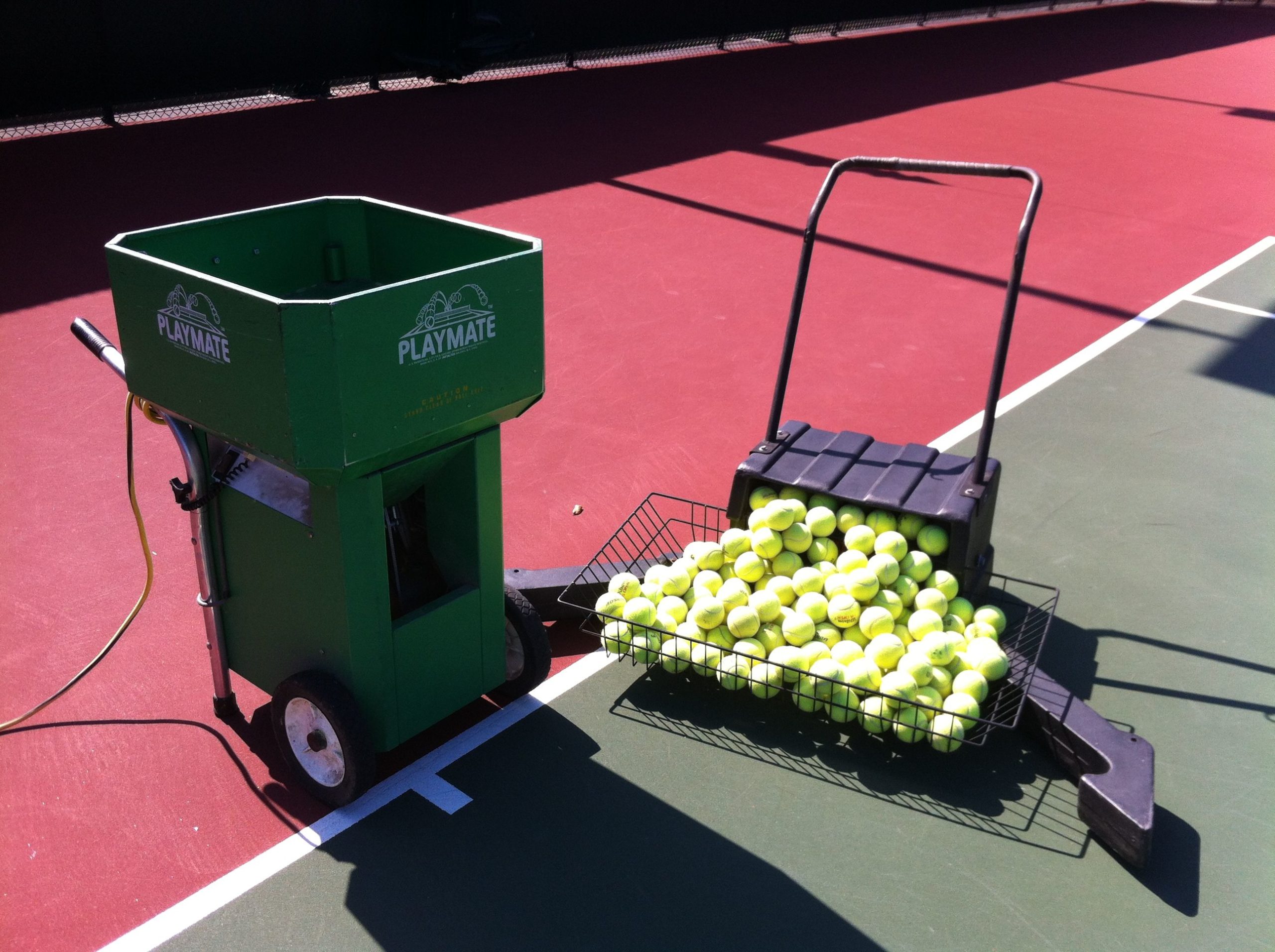 My first hitting partner when playtesting the Wilson

What I discovered when testing is that the ball machine is an excellent way to get to know your new racquet. It can be set up to feed you slice and topspin groundies and volleys, and you can set the interval between shots as fast or slow as you like. The machine I used didn’t oscillate or do overheads, but many others do. It also gives you access to a gazillion balls to use for serve practice.

To complete my playtesting, I also squeezed in a group drill (followed by a long set of singles), a private (my pro LOVED the racquet!)  and some doubles matches, so I really got the feel of what the Pro Staff 97 V13 racquet could do.

In my best Texas accent… “Here’s the lowdown on the Wilson Pro Staff 97 V13!“ 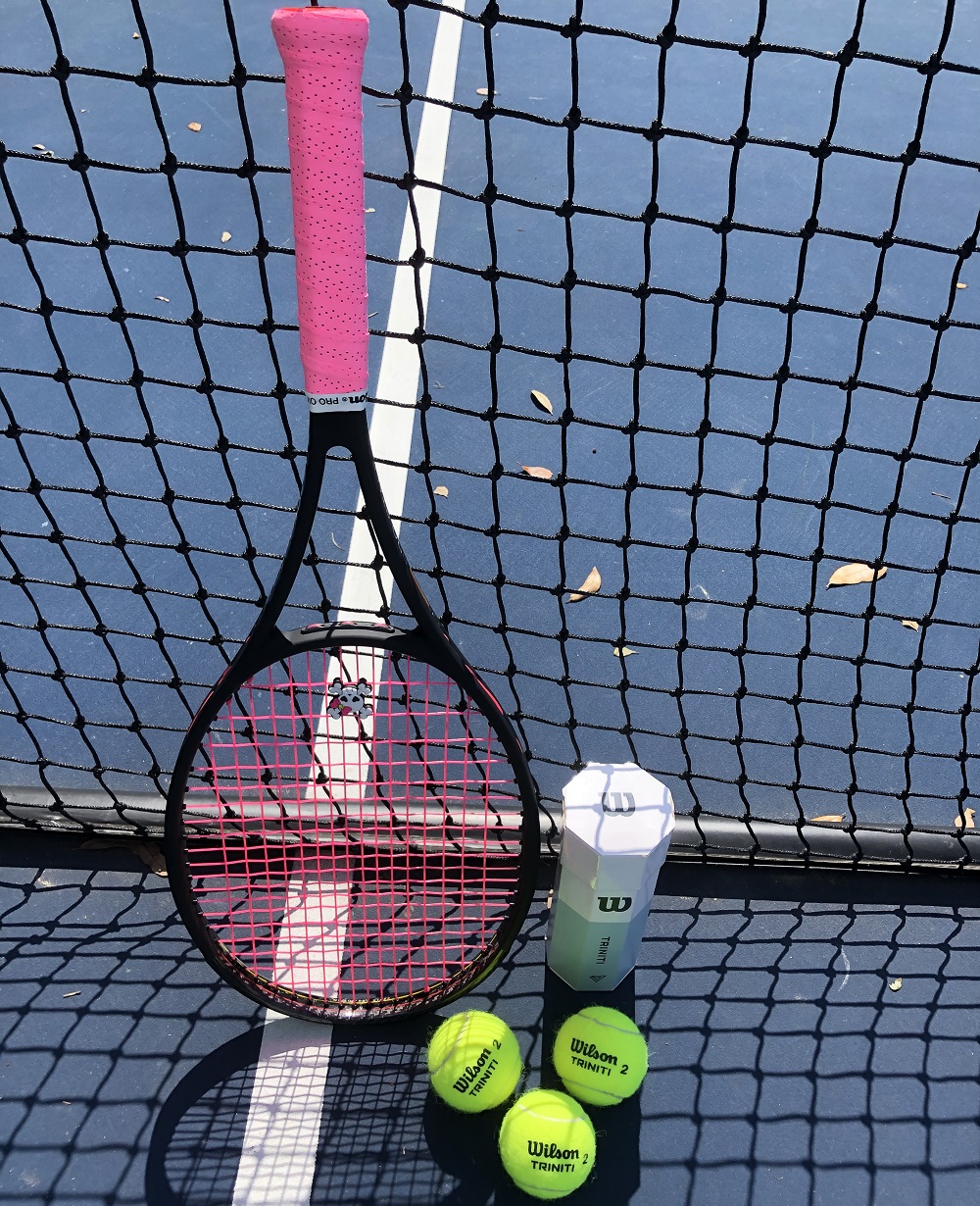 The perfect accessories for the Wilson Pro Staff 97 V13 tennis racquet (other than perfect neon pink strings and overgrip) are the eco-friendly Wilson Triniti tennis balls!

I started out hitting groundstrokes with the ball machine, and I noticed that the racquet frame was a little stiffer than my regular racquet, but not so much that I couldn’t adapt.

I’m more of a strategizing doubles player, but when practicing with the ball machine, I turn into a singles baseliner. There’s just something so satisfying about ripping “winners” for 2 hours… * sigh * I typically hit a hard, flat groundstroke (both forehand and backhand), and for me, the denser string bed offered excellent consistency and control.

I will say, however, that hitting forehands with heavy topspin or slice took a little getting use to at first. The balls didn’t land as deep as I thought they would. However, once I added a little more muscle and aimed a little higher over the net, the balls were landing right where I wanted them to. This racquet is all about control!

I prefer taking the ball early, and because the Pro Staff 97 V13 is more head light, it’s easier to get it back and ready — even for the bullet serves. Not only that, but the denser string pattern literally creates a wall that helps block those hard serves back like a charm. 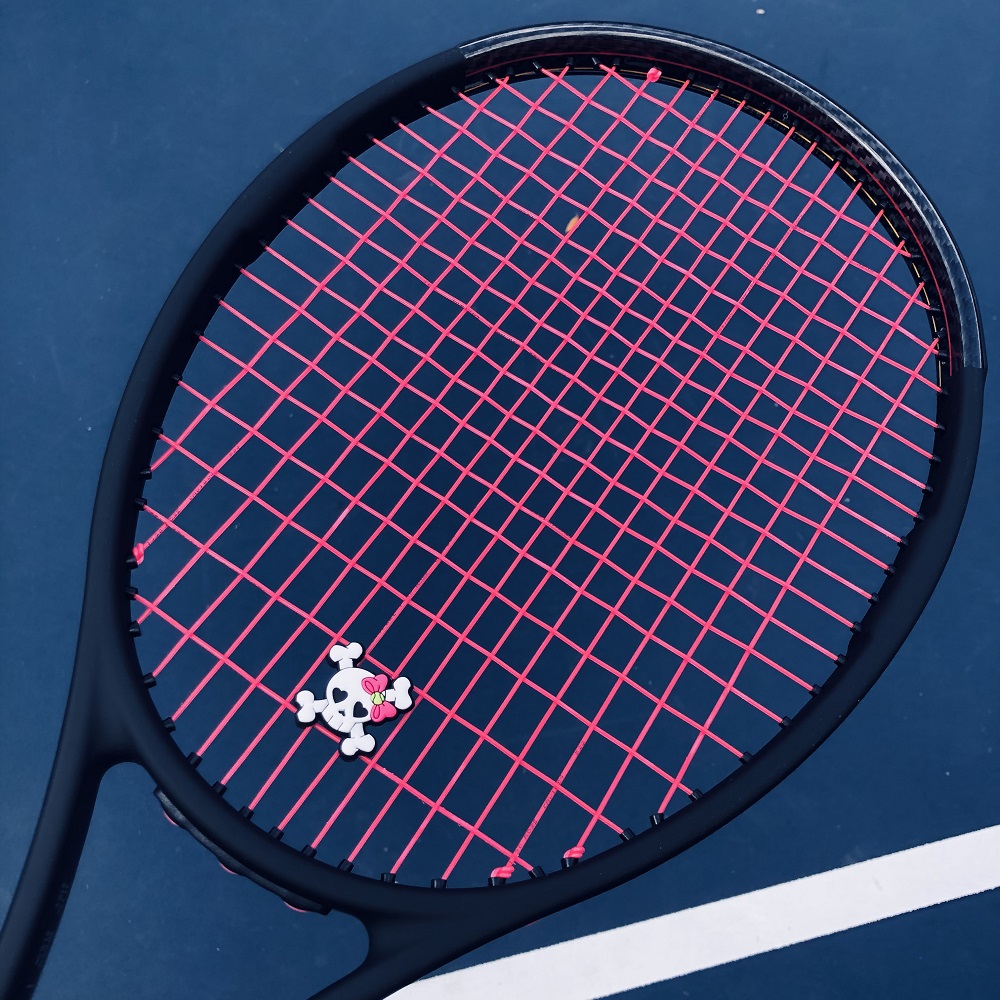 You can see how the string pattern gets denser in the center.

I’m a net monster, and this is my favorite shot of all. Racquets like the Pro Staff 97 V13 that have stiffer frames and a lighter head are perfect for doubles players who love to volley (like moi!) It’s that combination that makes the racquet easy to handle at the net. And because of the easy maneuverability, I could get the racquet ready in time to place the volleys where I wanted, whether short or deep. I could literally feel my volleys “pop” off the racquet.

I got some good serving practice in with the Pro Staff 97 V13 when I worked with the ball machine. Because this racquet is head light, the swing is pretty effortless, and I know many players prefer that. I served well and had plenty of pace, but I’m one of the picky ones who prefers a little more weight behind my serve. Fortunately, that can easily be corrected by adding some lead tape to the head. I didn’t do that for the review, but I might later. I say might because…

When playtesting in match situations, I noticed that it was super easy to initiate the swing and follow-through momentum while in the trophy pose waiting for the overheads. This is a big plus for league players who have to deal with the dreaded “lobbers.” So, I think I’ll hold off on lead tape for now :-)

Lastly, if you want to try the lead tape but have never worked with it before, talk with your pro or the tech who strings your racquet first. You don’t want your racquet head weight lopsided or too heavy.

Getting ready to serve up some eco-friendly Wilson Triniti tennis balls!

Overall, I feel that the Pro Staff 97 V13 is an outstanding racquet. The denser string bed offers more control, and with a little more muscle, you’ll find you get plenty of power for those deeper shots. The lighter head also allow for a faster swing, which is especially great for handling opponents with bullet serves. And I may play around with the lead tape to see if it’s that I really want or not. I am going to continue playing with it and post another review later on.

In my opinion, this racquet is perfect for intermediate to more advanced players who prefer a stiffer frame: aggressive baseliners with big swings on those deep shots, as well as doubles players and those who love to serve and volley.

The stiffer frame is not for everyone – especially those who are prone to tennis elbow. If you are such a player and still want this racquet, talk with your coach and/or stringing tech and they will make sure you get the right strings (natural gut is a great choice) and string tension.

I’ve only played with the Pro Staff 97 V13 racquet, but there are two more in this 13th generation release: the Pro Staff RF97 V13 and the Pro Staff L97 V13 tennis racquets, and all can be found at Wilson.com.

Have you played with this racquet yet? What did you love about it? Please share in the comments below, and be sure to share this review with your tennis playing peeps!